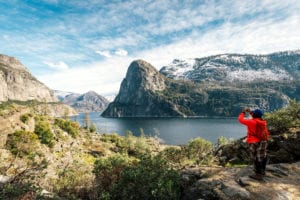 The Hetch Hetchy Valley is one of Yosemite’s hidden jewels. Formed millions of years ago by water and glacial erosion, this stunning valley (half the size of Yosemite Valley) was described by naturalist John Muir as “a grand landscape garden, one of Nature’s rarest and most precious mountain temples.” Hetch Hetchy has always been overshadowed by its twin sister, Yosemite Valley. We like it that way since the Hetch Hetchy area remains a serene and uncrowded oasis. Visitors are constantly surprised and impressed by the beauty of Hetch Hetchy. And since Hetch Hetchy is right in our backyard (the Hetch Hetchy entrance to Yosemite is a short drive down Evergreen Road), it’s the perfect place for a day trip or afternoon excursion during your visit to the Evergreen. Hetch Hetchy is more than a recreation destination – it is the home of a massive reservoir and the center of a heated political and environmental debate.

The Hetch Hetchy Valley underwent a monumental transformation when the City Of San Francisco received the approval of Congress in 1913 to build a dam in the Hetch Hetchy Valley, thus storing the water of the Tuolumne River and flooding the valley to a height of over 350 feet. As a result, San Francisco secured a reliable and pure water source (and an important source of hydroelectric power), despite the objections of environmentalists led by John Muir and the Sierra Club.

The Hetch Hetchy water system was and is a marvel in engineering. Water from the reservoir travels 160 miles in tunnels and pipelines from Yosemite to the San Francisco Bay Area. The system relies entirely on gravity to deliver this water; there are no pumping stations along the way. Overall, the reservoir stores some 117 billion gallons of water and provides the San Francisco Bay Area with 180 million gallons per day. In addition, the purity of the water is such that no filtration is required whatsoever.

The battle to Restore Hetch Hetchy

In recent years, with the dam and water delivery system in need of billions of dollars of repairs, environmentalists and politicians alike have begun to explore opportunities to tear down the dam and restore the Hetch Hetchy Valley to its former state.

The idea was sparked by the former Secretary of the Interior under Ronald Reagan, Donald Hodel. The movement has slowly gained momentum as environmental groups like the Sierra Club and Restore Hetch Hetchy have completed feasibility studies and effectively lobbied Congress. In 2006, California governor, Arnold Schwarzenegger, declared that the project is feasible and that the state needs to take a closer look at the possibility of restoring Hetch Hetchy.

The center of the debate today revolves around cost and priority. With cost estimates ranging from $2-10 billion and with Bay Area residents dependent upon the water and power that Hetch Hetchy provides, this is no easy decision. What is clear is that this debate will continue to occupy center stage in the years to come.

Regardless of your views on this issue, Hetch Hetchy is a wonderful place to recreate. The valley is home to a number of permanent and seasonal waterfalls, including powerful Wapama Falls (1,300 ft) and beautiful Tueeulala Falls (800 ft).

Many hiking trails originate from the dam, offering a variety of options from easy hikes to strenuous backpacking excursions. The easy 2.5 miles (each way) trail to Wapama Falls is a favorite for adults and children alike. This trail, which runs through a rock tunnel and then along the north side of the reservoir, allows visitors to experience the true power and majesty of the Hetch Hetchy waterfalls.

The O’Shaughnessy Dam itself is a fascinating engineering marvel. If you’ve never walked on top of a 400′ tall dam, this opportunity is not to be missed. The true scale of this massive monolith cannot be appreciated until you’ve peered over the dam to the river below (vertigo sufferers beware!). The dam is especially impressive when you consider that it was built in the early 20th century and was among the largest civil engineering projects in its time, second only to the Panama Canal.